The current status involves collection, transport and disposal strategy. Waste is collected from different areas and sent to disposal at dumping ground sites which are currently servicing the city and are already overburdened with waste.  The following things are related to present waste management Process. The current dumping grounds in Mumbai are in Deonar, Mulund and Gorai. The combined area of the 3 landfills is 140 hectares. Area of Mumbai in comparison is 60340 hectares. Thus landfills constitute only 0.22% of the total area of Mumbai. The term landfilling refers to the practice where waste is being disposed and stored under more or less controlled conditions. Principles of landfilling include compaction, leveling of waste and final covering by earth, leachate collection system and landfill gas extraction. However due to space constraints and opposition from various citizens to create landfills spaces makes this option a far less viable option in the future.

Mumbai generates about 2000 tons of construction debris. As transportation of such debris is deemed to be expensive towards the dumping sites, various construction activities in Mumbai that generate waste will use loopholes and illegal ways to dump the construction debris. Due to lack of space in Mumbai the waste has to be carried off towards long distances. This increases the transportation cost leading to the business becoming ‘unprofitable’. Thus such debris is dumped into the creeks which affects the ecosystem of mangroves. The ecosystem of creeks in regions of Vasai, Gorai, Mankhurd are already endangered due to illegal dumping of waste.

On January 27th 2016 Mumbai witnessed a smog generated due to a mysterious fire that started in the deonar dumping grounds. The fire was huge enough to cause a smog in the city for 3 days and was visible by satellites in outer space. Regions in Mumbai had seen huge levels of pollution levels with the air quality index reaching 347 which comes into hazardous category seriously affecting health of citizens in Mumbai. As a result schools were closed for 2 days with citizens advised to remain at homes.

While NGT has imposed a ban on open burning of waste with a fine upto 25000 rupees. The law is generally not implemented.

A 2010 study by NEERI in Mumbai conducted about air quality assessment has stated about 2% of total MSW waste generated is burnt on the streets and about 10 % of the waste is burnt in landfills. 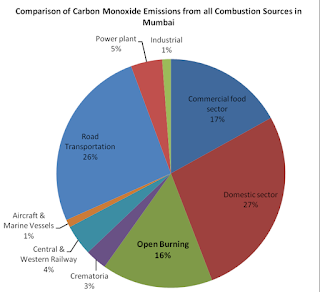 Thus as explained in the above pie chart open burning is the 3rd largest contributor towards CO pollution in MumbaiDeonar burning as witnessed from satellites. 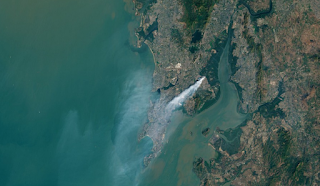 In landfills biological degradation of waste results in generation of leachate. Such leachate can pollute the water sources nearby the landfill areas and may also pollute the groundwater. 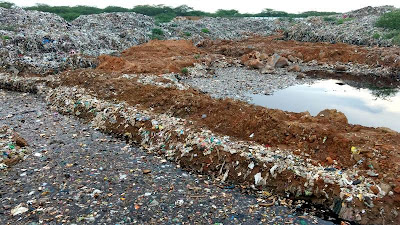 Leachates are generally formed due to anaerobic decomposition of biodegradable waste which is often mixed with heavy metals (such as chromium, lead, nickel )developed from inorganic waste. Such metals increase the solubility of iron and manganese in groundwater thus increasing the concentration resulting in increased groundwater pollution.

Climate change caused due to anthropogenic activities is one of the biggest problems the world has to face. Due to waste storage at landfills in particular, there are incidences of methane releases. Such methane released due to solid waste management operations should be captured. Thus organic waste which is decomposed at landfills have the problem of anaerobic decomposition leading to formation of methane gas. Thus to prevent methane formation it is essential to avoid an-aerobic decomposition.

Thus, we expect you to see forward towards different ideas for completely eliminating waste and drawn them into compost. Since, nature is the return cycle what we pay have to repent ourselves. We provide the solution of all these predicaments. In case of any queries or grievances you can visit us at klimrus,in 27 Oct 20 Sandip Patil
Solid waste management techniques.  The following are the ways by which the problem of Solid…
WasteManagement
0