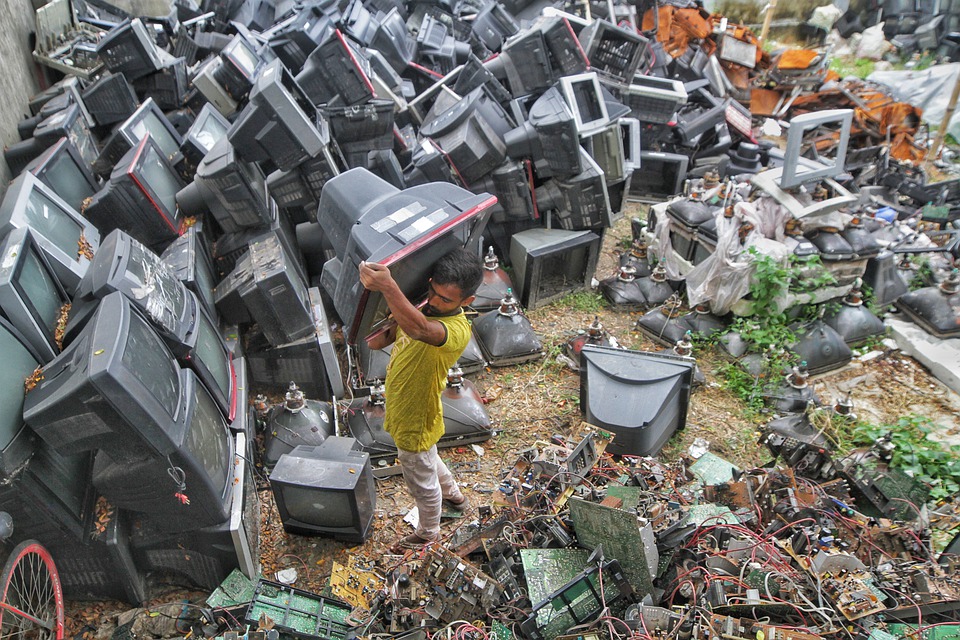 E waste or simply electronic waste is the refuse that is basically a term for electronic products that have become unwanted, non working or in some cases obsolete and have reached the end of their useful life. Because of technological advances many electronic products become obsolete in a few years. E.g- Floppy disc, VCR’s and now recently DVD players etc. E waste is created from anything electronic : Computers, TV’s, monitors,Cell phones, VCR’s CD players etc. The recent surge in telecommunication and advent of smartphones and computers have impacted the digital divide in India to a considerable extent and has thus resulted in high electronic gadget penetration across a plethora of households in India (More than a billion mobile phone users).

Why is E waste management important ?

– Rich source of Raw material – Metals such as Gold, Silver, Palladium, Lead etc are generally found in Printed Circuit boards (PCBs) which can be extracted.

– Toxic materials in E waste – E waste also comprises of Lead, chromium , mercury, cadmium and other heavy metals which if not treated properly could lead to pollution of the environment.

The below flowchart explains the process of E waste management. Quantity of E-waste generated and the content of toxic and valuable materials, it has become an emerging problem throughout the world. In 1994, it was estimated that approximately 20 million that is about 7 million tons of PCs became obsolete. In 2010 this figure has increased to over 150 million PCs. 2 The exponential growth in production, falling prices , coupled with rapid advancements in technology making old technology obsolete within few years make the situation even more dire. In the United States about 80 million communication devices were sold (2003) which grew to 152 million in 2008 which means a growth of about 90% within 5 years. In the European Union (EU), the total units of electronic devices

2 “Electronic waste – an emerging threat to the environment of urban India.” placed on the market in 2009 were more than 3.8 billion units, including 265 million computers, roughly 245 million in home consumer electronics, and 197 million consumer appliances. In China, approximately 20 million refrigerators and more than 48 million TVs were sold in 2001, and nearly 40 million PCs were sold in 2009. Meanwhile there is also the problem of dumping E waste in developing 3 countries.

India produces about 18.5 lakh MT every year. The Indian IT industry is one of the major drivers for the rapid Indian economic growth in last couple decades. The consumer sector in India is also becoming a huge market for electronic devices as such devices had contributed to the benefit of comfort, health security and nowadays even as a financial tool. To give an example the 2005 calculations of Country Level WEEE(Waste Electrical and Electronic Equipment) assessment study by IRGSSA (2005) shows 146,180 tonnes of e waste. In the year 2016 almost a decade later the all India WEEE level is at 18.5 lakh tonnes. The e waste generated has increased exponentially by 8 times in a short span of time.The graph below shows the generation of E waste in some of the Indian Cities year wise (2016).

3 “Electronic waste – an emerging threat to the environment of urban India. The following is the composition of Indian E waste. India’s efficiency of E waste treatment out of the total waste generated is only at 1.5%. This is majorly due to poor infrastructure, legislation framework which causes a waste of already diminishing natural resources and irreversible damage to environment and people who are working in this industry. A major chunk of the labour used in this sector is child labour. In India, about 4-5 lakhs child labours between the age group of 10-15 are observed to be engaged in various e-waste (electronic waste) activities, without adequate protection and safeguards in various yards and recycling workshops.5 In India most of the e waste management comes under the informal sector which results in lack of safety gear and safety measures when it comes to handling of such waste. This results in various contamination of the human bodies and lead to diseases as shown in the table below. As more than 50 % of the labour employed are children (from 10- 15 years of age) especially in Urban areas, it results in endangering the life of young children thus affecting Urban health.

Clearly the current state of E waste recycling and mitigation requires massive overhaul and upgradation in order to improve efficiency. The major roadblocks for E waste mitigation in India are.

– Due to informal nature, there is an inherent lack of data on E waste essential for policy analysis.

– Only a fraction of E waste which is estimated at 10% manage to find it’s way back to the recyclers due to absence of essential take back scheme for consumers.

– The lack of formal E waste recycling plants in India which also adheres to safety norms results in dependence on E waste recycling in informal settings which can pose challenges to health care and environment.

– There is no doubt that proper formal sector of E waste recycling can create employment generate resources and set up an industry that could lead to proper disposal of waste.

– It is high time the manufactures, consumers, regulators, municipal authorities, state governments, and policy makers take up the matter seriously so as to ensure that the urban city is not affected.

– Improvement in collection and recycling centers.

– Capacity Building, training and awareness programmes. Improvements in Collection and Recycling Structures. Many disposed of machines contain usable parts which could be rescued and joined with other utilised hardware to make a working unit. It is labour intensive work to excavate, examine and test components and afterward reassemble them into finished working machines. Institutional foundations, including e-waste collection, transportation, treatment, stockpiling, recuperation and transfer, should be set up, at national and additionally local levels for the optimal utilization of the e waste centers. These offices ought to be endorsed by the regulatory authority and if required fortified with adequate incentives. Foundation of e- waste gathering, trade and recycling ought to be empowered in association with governments, NGOs and manufacturers. Improvements in litigation and policy structure. Extended producer responsibility(EPR) is an ecological strategy approach in which a manufacturer’s obligation regarding an item is extended out to the post phase of the item’s life cycle, including its last disposal. The more greater the capacity of the actor to impact the ecological effects of the product framework, the greater the share of responsibility for addressing those impacts should be. Such actors are the buyers, the providers, and the item makers. Buyers can influence the environmental effects of items in various ways: by means of procurement decisions (picking earth neighbourly items), by means of support and the environmentally friendly operation of items, and by means of cautious transfer (e.g., isolated transfer of apparatuses for recycling). Manufacturers can diminish the life-cycle ecological effects of their items through their impact on product design, material choices, manufacturing processes, product delivery, and product system support. The framework configuration should be with the end goal that there are balanced checks and balance, particularly to avoid free riders .There should also be adequate implementation of laws just to make sure whether or not the compliance are met. Manufacturers should entice customers to exchange the old products through buyback mechanism. Also electronic items should have markings that could denote the levels of toxicity of E waste in India. This will enable easy identification of the products that could lead to an improved way of segregation.

Solid waste Management , which is as of now a mammoth undertaking in India, is having additional problems by the intrusion of e-waste, especially PC’s . There exists a critical requirement for an itemized evaluation of the present and future situation including measurement, attributes, existing disposal practices, environmental effect and so forth. Institutional frameworks, including e-waste accumulation, transportation, treatment, stockpiling, recuperation and disposal, should be set up, at national as well as local levels for the optimal utilization of E-waste centers. Foundation of e-waste accumulation, trade and recycling focuses ought to be supported in organization with private businesses and manufacturers. management of e-wastes. Establishment of e-waste collection, exchange and recycling centers should be encouraged in partnership with private entrepreneurs and manufacturers.